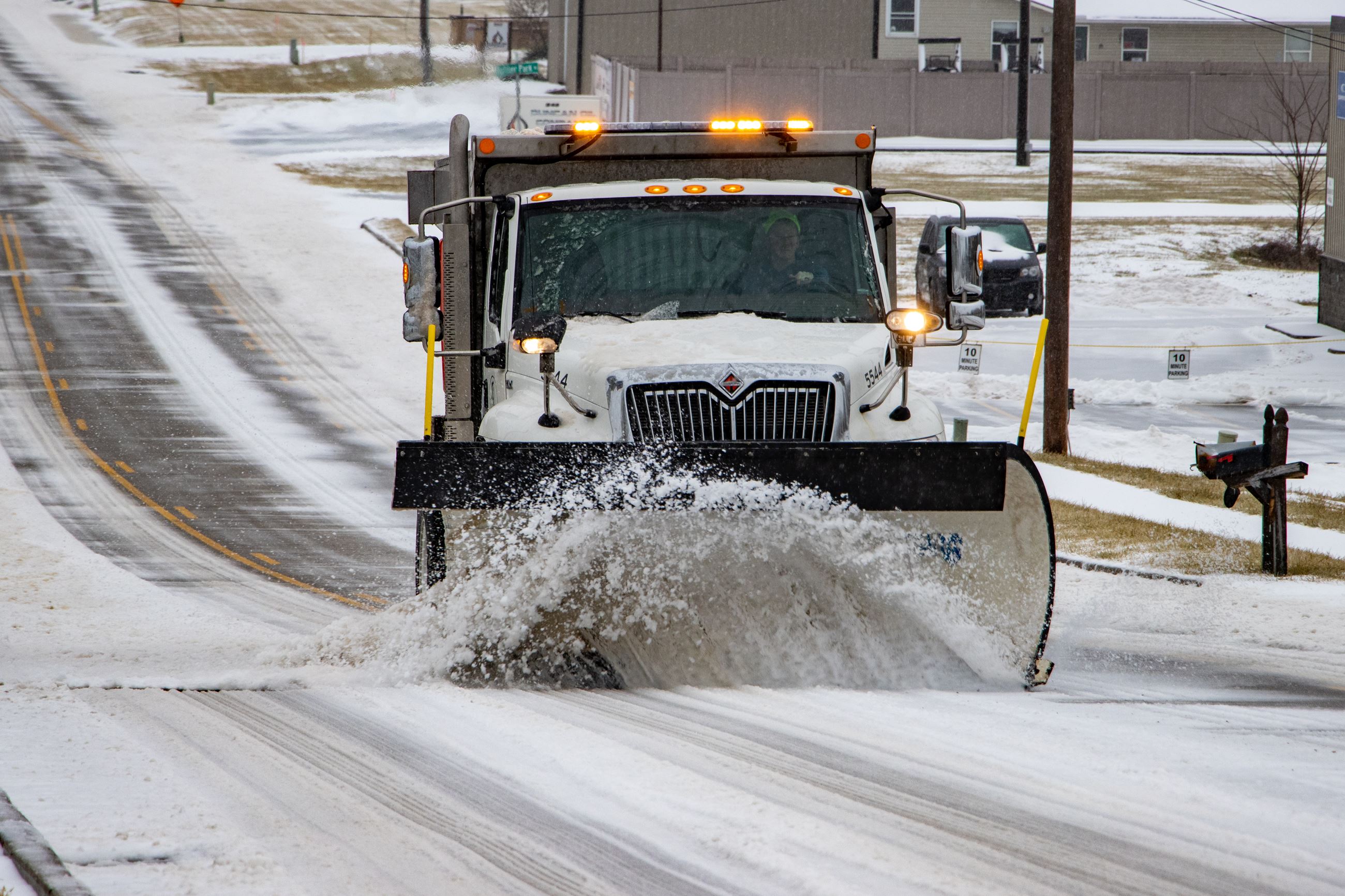 Every year, before winter weather strikes, the City of Beavercreek’s Public Service Division reviews its winter weather plan. The division’s goal is to provide safe passage for everyone traveling in the city while being environmentally and fiscally responsible. The city pretreats roads using a brine solution when conditions allow. This helps to reduce the amount of road salt used during and after winter weather events.

When it snows, the city prioritizes treating high-traffic roadways. The city first focuses on nine main routes, including Dayton-Xenia, North Fairfield, Kemp, Beaver Valley, U.S. 35, Indian Ripple, and several other roads. Once it has stopped snowing and all of the main routes are cleared, crews will then focus on neighborhoods. This requires 18 snowplow drivers to treat the city’s 577 lane miles of roadways.

It is important to keep a safe distance from the plow truck to protect yourself and your vehicle. Plow trucks make sudden stops, turns and other actions that may not be expected for a normal vehicle. Please remember if snow is down, then slow down. If you need to travel during a winter event, be sure to give yourself extra time to arrive at your destination safely.

Also, take a moment to shake your mailbox to make sure it isn’t loose. When snowplows drive by, most of the time they do not actually touch mailboxes; however, the force of snow thrown from a snow plow can knock down an unstable mailbox. If your mailbox is damaged, please contact the City of Beavercreek Public Service Division by calling (937) 427-5540.

Before a snow or ice event, city crews line streets with salt brine, a clear water and sodium chloride solution composed of tap water and road salt. The city will not apply salt brine if it is raining prior to a winter weather event because the rain will wash away the solution, wasting time, money, and resources.

The mixture has a freezing point of -6 degrees Fahrenheit. This is a cost-saving measure that enhances the city’s ability to help keep streets clear in the winter, while conserving the city’s salt stockpile for more major storm events.

The city pretreats streets by applying salt brine directly to the road when road temperatures are predicted to drop below freezing, even when there is no snow or ice in the immediate weather forecast. The brine liquid is placed on the roadway in small streams, typically across one lane at a time.

When the weather is clear, the brine will dry and create a bonded strip of fine salt on the pavement. These strips will remain on the pavement for several days, even under heavy traffic conditions. When it rains or snows, the moisture will activate the strips into brine and help prevent a snow/ice bond from forming on the roadway.

Application of dry salt directly on the roadway is not as cost efficient as utilizing a brine mixture. On average, it cost $26.03 per lane mile to apply a granular salt. This equates to roughly $15,000 to treat all city roadways once.

Application of a brine solution is much more cost efficient. On average, it cost $5.55 per lane mile or $3,202 to treat all 577 lane miles within the City of Beavercreek.

Applying brine to roadways before snow or ice has bonded can be 10 times more effective than placing salt on top of snow and ice after it has bonded to the pavement.

Additionally, pretreating is labor efficient since the process can be performed during normal shift hours. Pretreating reduces overtime and greatly reduces the total cost of treatment, as once the snow/ice has bonded to the pavement, it is more expensive and time consuming to remove.

Beyond saving on material and labor costs, the ability to treat a roadway at the earliest stages of a winter event, when drivers are most likely to overestimate driving conditions, provides an additional savings by reducing the frequency of traffic crashes.

Placing dry granular salt on the roadway as a pretreatment for deicing is less efficient than salt brine for several reasons: